As a child I used to read voraciously. During the summer holidays it wasn’t unusual for me to make 2 visits to Alloa library in the one day, taking my limit of 3 books each time.

I would read anything and everything. When I started at secondary school and discovered the joys of rugby I think I read every rugby book they had, everything from a history of Kelso rugby club to Carwyn James Back Row paper which revolutionised the role of the flank forward. I read the biographies of famous players, coaching manuals galore, I learned about the Pontypool front row and knew that all of Max Boyce’s tales were true because as he said “I was there….”

And then after buying hundreds and hundreds of books for some reason I stopped reading. It wasn’t a sudden thing and I am not sure there was even a reason for it. From wandering the word strewn lanes of my imagination maybe I was just too taken up with the here and now to allow the time to read.

I have recently started reading again. I got myself an iPad and eventually got hold of the kindle app and despite my reservations dowloaded some books. Suddenly I found it easy to read again. I rattled through The Hunger Games Trilogy, and while it isn’t exactly great literature it is sufficiently different to be quite readable. 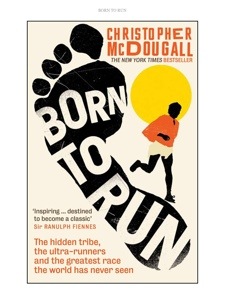 There has been a lot of hype about Born To Run. It was good, but for me it wasn’t the epiphany that sone people claim. Having missed the bandwagon associated with this book, I hadn’t even heard of Micah True until I started reading up on him when he died a short time ago. Don’t get me wrong, I think this book should be read by everyone who runs. A lot of the background is fascinating especially some of the history and politics of the running shoe industry. The characters are painted colourfully. The book got me interested in finding out a bit more about Scott Jurek. I knew of hs name, but didn’t really know of his pedigree. It didn’t make me want to go barefoot, but it did reinforce my interest in running long distances in the hills. It also left me feeling a wee bit sad at the exploitation that happens to indigenous peoples, and I think that in some ways the author was both celebrating and exploiting the Tarahumara himself. 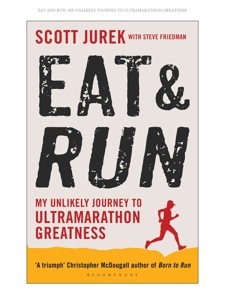 Next up was Scott Jurek’s book. This was a book which I really enjoyed. I knew Scott Jurek’s name from being associated with Brooks running shoes which I wear but nothing really about him. After reading this, I have no doubt that Scott Jurek is the real deal, unlike ultra celebrities like Dean Karnazes who are exploiting the lack of knowledge the general public has about ultra running to build a cult following by having white teeth and some good sound bites. Much as I liked this book it isnt going to turn me into a vegan, though at least his logic for his dietary choices is well thought out and arrived at for sensible reasons. I will confess to having skimmed the recipes. I was however inspired to start taking Spirulina, which is allegedly the supplement of choice of Aztec warriors. It hasn’t turned me into an Aztec warrior, but in a very unscientific sample of one I do seem to have more energy and am less likely to fall asleep in my comfy chair in the evening when I take it. He also comes across as a nice bloke. 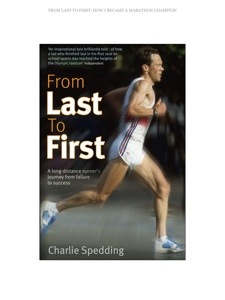 Charlie Spedding won a bronze medal in the marathon at the Los Angeles Olympics. When you consider that now, 25 years later, the top British men aren’t getting anywhere near the times he and Steve Jones and a host of others were running then, it says something about the state of British distance running. Again this is a good book. He just talks so much sense. His approach to training and how he managed to become an Olympic medallist despite years of injuries and relative mediocrity (at least compared to his illustrious peers) are fascinating. His views on why we don’t produce great distance runners  any more are forthright and probably spot on. We simply don’t exercise enough and we don’t aim high enough. He argues that part of the problem is that for many modern athletes consciously or sub-consciously limit themselves – their goal is get lottery funding and maintain full time athlete status rather than having a goal of being the very best.  He is also a strong advocate of competition in school sport stating the obvious that everyone can’t be a winner and that by removing the distinction between the winner and the loser, you also remove the need to try to be better.  He also has interesting views on how to prepare yourself for racing as opposed to preparing yourself for training. 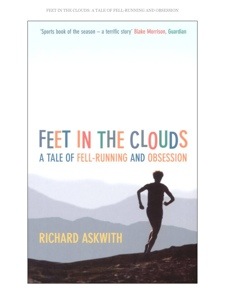 The final runing book I have read recently is Feet In The Clouds. This book is about Fell Running or Hill Running as we call it in Scotland and about the author’s quest to complete the Bob Graham Round. The book itself dragged on a bit, but what it was really interesting for, was its description of some of the old timers such as Kenny Stuart who, by all accounts were phenomenal athletes, many of whom fell foul of the old amateur/professional nonsense where the amateurs earned more than the pro’s but the pro’s were banned from competing at the major events because of their so called professional status. It was also really interesting to read about the significance of the Alva Hill race in the folklore of the sport, especially as I live only 3 or 4 miles from Alva and to my shame havent yet ever run the Alva Hill despite running in the local hills a fair bit.  So, worth a read for the history and the philosophies of the old timers which are captured respectfully and enthusiastically, even though the descriptions of the hills in the Bob Graham do drag on a bit.

Is there inspiration to be gained from these books? Actually there is. The lesson that comes through loud and clear from all of these books is that to be a good endurance runner (whatever good means)  requires running to be a lifestyle. Technology and training all help, but fundamentally you need to have an active lifestyle that builds your endurance through your day to day activities, whether that means running through the mountains of Mexico because you have no transport, working on a sheep farm and walking up and down hills all day or just plain old knocking out 120 mile weeks.  Or as some of us remember, running about the streets playing 20 a side games of football which lasted from first thing in the morning until the last player was shouted in by their mum when it got dark. The other common factor is that the running lifestyle includes a very simple diet. No modern processed foods, and no modern portion sizes.  Add to the lifestyle a willingness to work really hard,  a resillience to and acceptance of suffering as part of life, the imagination to dream up big goals and a refusal to give up and you have something approaching a formula for running long distances.

The question for me is that having identified a formula, can I apply that formula to myself and come up with the right answer?