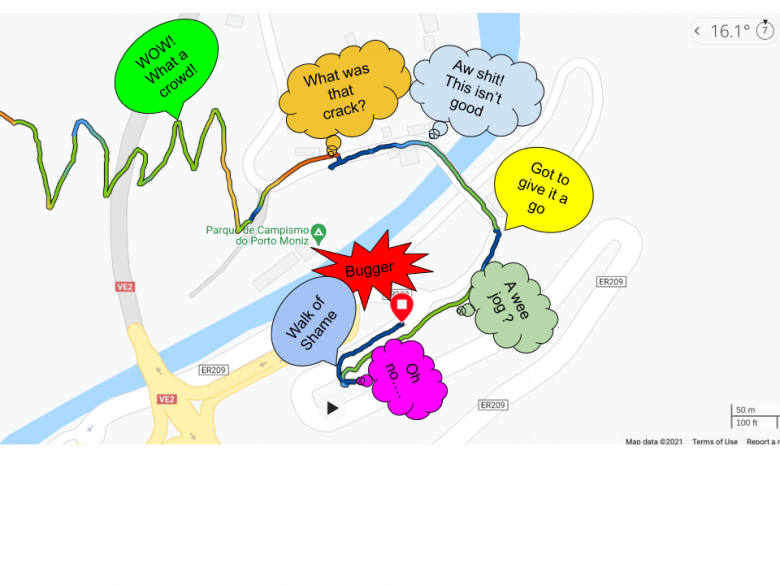 MIUT had been a long time coming round. Originally scheduled for April 2020, then rescheduled to April 2021 and finally a further reschedule until November 2021.

MIUT is a super race, the route is brutally hilly and technical, the race organisation is friendly and efficient,  and the warm Madeiran climate is welcome at any time of year.

After a difficult covid interrupted couple of years I was keen to get stuck in about this race. I had raced MIUT twice previously and with one finish and one DNF this was to be the decider.  I had also decided I would use this race as a qualifier for future adventures. Finally I was feeling bruised from a DNF at L’echappee Belle earlier in the summer and considered this to be my shot at redemption, my chance to prove I wasn’t over the hill and still able to take on this type of race. MIUT is the sort of race you really need to want to finish and I was not short on motivation.

As race day approached I had the fear. The enormity of the challenge and the consequences of failure weighed heavily on my mind. I always find November races problematic because it is difficult to sustain training and fitness so late in the season. This year had been no different – after a good first half to the year I had found it difficult to keep up the volume of training I would have liked. A series of niggly injuries meant I had to manage the amount I could do. However in the end, I had done enough. Not as much as I would have liked but I knew I had enough in my legs for the task ahead.

As I took my last short pre-race workouts, I was pleasantly surprised how much zing I had in my legs as a result of my enforced taper. Still the demons played on my mind worrying about the weather, my dodgy left knee, my recurring tendinitis in my right ankle, and whether I had eaten and drunk too much while enjoying our nice pre-race hotel.

The Race is on

The race itself starts at midnight in Porto Moniz in the North of Madeira. The coach journey to the start  was a nervous, quiet affair. Runners eyeing each other up, working out where they think they sit in our imaginary pecking order. Some runners chatted very quietly, others snoozed as the bus wound its way up and down the steep hairpin bends, the quiet punctuated only by the alarmingly loud sound  of brakes squealing and metal rubbing on metal, but despite the grinding brakes we arrived safely at the race start.

It was a cold wait for the start of the race, and the reduction in runner numbers for this rescheduled edition was very obvious, bringing with it the additional pressure of having nowhere to hide in a smaller field.

Inevitably, on the stroke of midnight the race started. No doubt the organisers breathed a sigh of relief to finally get the show on the road. The pent up excitement of the runners finally getting to compete was released in a mad cavalry charge through the town of Port Moniz.

For a very short distance the pace was hot, but quickly the road started to rise and the throng of runners played the little game which is always played at this point – who is going to walk first? This is a silly game because everyone is wanting to walk, but needs the permission of the herd slowing and walking as the hill becomes too steep to run. When the walking starts we all breathe a sigh of relief and get on with the race proper.

The first few kilometres works it way up narrow cobbled streets. I had forgotten just how steep these streets were. Despite having raced here before I still shook my head in disbelief not just at the ridiculous gradient but at the fact there are cars parked on what are little more than cobbled donkey tracks. These are not 4×4’s mind, they are usually clapped out little Fiats and Citroens with tiny engines. I have no idea how they get there, but I do know that I certainly wouldn’t have the balls to try to drive those roads.

The night was punctuated by the click clack of poles on cobbles as we worked our way up the switchbacks. All of the usual suspects were there – old guys with short shorts and legs like tree trunks; unfeasibly tall Danes or Swiss dressed head to toe in alarmingly fitting lycra; the over confident young newbies trying to elbow their way through the crowds; the fit blonde lady of indeterminate age and strong legs, kitted out in Salomon’s finest, striding purposefully up hill; and me, the aging Scotsman pumping and sweating like a warthog with a bee up its arse.

This initial climb was adding to my fears. It seemed harder than I remembered it should and I felt like my belly was sticking out like a beer and Pasteis de nata filled balloon. Confidence was not high, but I got a little boost when the climb topped out sooner than I expected. 400 metres climbed in just over 2Km. Steep!  I was having to push a little too hard to keep up as we ran the short undulating section across the top of the hill. However I was still in the game as we turned off the road and into the downhill.

All downhill from here

This next section of the course is one of the most electrifying pieces of running anywhere in the world. It is up there in my list with the Wellesley scream tunnel in Boston, the turn off the Queensboro bridge in New York, or the run through Chamonix in UTMB, or the top of the Maido climb and the start of the Grand Raid in Reunion.

The route drops 1000 feet down sharp zig zags to a bridge at Ribeira da Janela. Large numbers of supporters gather at the bridge to watch the ribbon of light as the runners snake downhill and in return for the light show they make the most boisterous racket which can be heard right at the top of the hill.

As I started on the zig zags whch work down narrow levadas and terraces linked by steep concrete steps my mood was improving. I was feeling quite nimble and light on my feet as I navigated the tricky terrain.  In the past this has been quite a pressured descent because I usually climb well but descend slowly which means there are usually runners at your heels trying to go faster downhill than I am comfortable with. This time I was doing ok and keeping my place in the snake quite comfortably and skipping down the steps more nimbly than usual.  My fears were dissipating and my belly balloon was shrinking as I felt myself settling in to the rythmn of the race.

The closer we got to the bottom of the hill,the brighter the lights became, the more raucous the noise became, and the light snake became faster and more energised.

At the bottom of the hill, excited runners appear from the last set of steps like they are being shot out of a cannon on to a short downhill section of road.

Like every other runner, I straightened up and couldn’t help but break into a grin as I stretched my legs to put on a show for the crowd on the bridge before turning the corner and heading up into the big mountains.

Just as I got into my stride, my foot wobbled  on the edge of a concrete gutter and I heard a loud crack like someone snapping a twig.  My brain registered the fact that didn’t sound good but it was a good few paces more before my leg worked out there was a problem associated with the noise and I ground to a halt.

I knew immediately this was not good, but tried to tell myself that maybe it was just air popping and I would be able to run it off. I started trying to hobble with something of a pantomime limp. Any number of runners slowed to ask in various languages if I was ok or to put a consolatory hand on my shoulder.  As I approached the bridge I got the most enormous cheer of encouragement and sympathy as Iimped through the supporters.

I knew in my heart of hearts that my race was done.  A race volunteer ran over to help me and asked if I wanted to continue. He told me there was a first aid team at the top of the next steps. I said I would like to try.  I crossed the bridge thinking that the next section was an uphill hike so maybe I could walk it off.

I turned off the road and started on the uphill.

I took a few steps and couldn’t climb.  I had to turn round and walk back down the short section of road against the flow of oncoming runners.

I was soon in the hands of the volunteers who sat me down on a wall while they sent for help. Shaking with pain and frustration I stopped my watch.

Much as I was really disappointed at having to stop after less than 5K, I couldn’t stay down for long. Everyone was lovely and in the slightly quaint old fashioned way these things are done in remote villages, the local policeman stood guard over me, one very old man walked halfway up hill to tell me I was very brave in broken English, while another animated man berated the mini bus which had come for me because it had parked 12 feet away so he made them draw forward so I didn’t have to walk.

From there it was a long trip in the back of a mini bus via an aid station for First Aid before ending up in a hospital bed at 3:30 am pumped full of Tramadol nursing a broken ankle.

I have run many races in many places. For me, one of the things which marks out a good race is how they respond when things don’t go well. MIUT is a good race in this respect. I was confirmed as DNF, collected by mini bus, taken to a race medic, then transported to hospital where they were already expecting me, and where the race’s own insurance paid for most of my treatment.  All of this happening in the middle of the night in a remote and mountainous location.

This race was supposed to be either the end of a streak of bad results in big races or it was to be confirmation that it was time to give it up.

After investing so much emotional capital, it would be easy to wallow in self pity or try to assign some sort of meaning to it.

In the end however, it is what it is, nothing more or less.

My overwhelming memory of this race is not of my thwarted ambitions, but of the kindness of people.

So many people were exceptionally kind and went out of their way to be helpful. Fellow runners, volunteers who looked after me, nurses, our hotel receptionist, the taxi driver who drove Helen around Funchal to collect all the equipment and medication I needed, airline staff arranging assistance for me, the list goes on.

It wasn’t the race I wanted and it didn’t answer any of the questions I was trying to answer. Instead of some heroic deeds, I have the sorry tale of breaking my ankle on tarmac only 5K into a 115Km mountain race.

Was it worth it?

We had a cracking adventure!