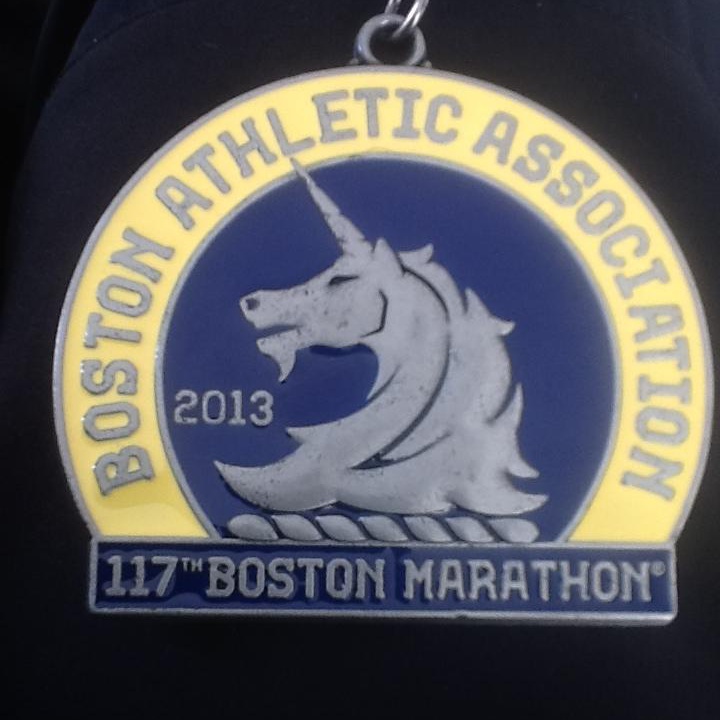 It is difficult to know where to begin to describe this year’s Boston marathon. I have tried to start writing this post several times and never quite managed to find the words.

It has been a week of powerful, powerful emotions. Arriving in Boston to run the marathon and getting caught up in the excitement which grips the City; meeting some truly inspirational people; running the race itself and realising you are part of the greatest race on earth; not performing as well as I wanted to and dealing with the depths of personal disappointment; crossing the line and getting that Boston medal round my neck; the bombings and all the fear, hurt, anger, sorrow they brought; the aftermath and the strong sense of dignity and community which followed.
With all of the sadness and confusion associated with the bombing it is easy to forget all of their good things which happened.

Marathon runners are sometimes thought of as selfish. It is an individual sport. It involves long hours of solitary activity. Yet marathon runners are part of something bigger. To be a marathon runner, you need the other competitors, you need the volunteers, the organisers and the spectators to share it with.  Running 26.2 miles doesn’t make you a marathon runner. You become a marathon runner when you stand on the start line with the intention of covering the distance in the very best time you can manage, and by doing so give the spectators someone to cheer for, your fellow competitors someone to race and share the road with, and having laid yourself bare you give that volunteer at the end a feeling of joy when they put that medal round your neck because they know you have earned it and they know that their hours of standing in the cold was worth it because you, the runner, gave them something to reward.

As many have said before, the marathon is almost the perfect distance. You cannot race a marathon on training or ability alone. Those two attributes get you through the first twenty miles. For the last six, you need heart.  In a marathon, you see heart. lots of it. A massive sweating, seething stream of heart. Running a marathon starts with a common desire for every single runner, the single idea that you can be better than you are. It is from this single idea that the spirit of the marathon flows. It is this spirit which the people of Boston recognise and which they have celebrated for 117 years.  It is the same spirit which makes Boston Strong. Boston doesn’t mess about.  Whether it is transporting 27000 runners to a start line 26 miles away by closing down all the roads and giving the phalanx of yellow school buses, the biggest, most heart pumping police escort you will see, or shutting down an entire city without hesitation to hunt for those who through their heinous crimes have offered insult and injury to their own. Boston does it right.

The Boston marathon is everything you imagine it will be and more.  From the famous start at Hopkinton, through the towns along the route, through Heartbreak Hill, the Citgo sign, Fenway Park, Boston College and the Wellesley Girls, the crowds grew and grew. It wasn’t just the number of people along the whole length of the course. These weren’t spectators, these were supporters. Supporters who screamed their heads off, waved funny placards which said stuff like “that isn’t sweat – it is awesome leaking out”. These were supporters who cheered as much for John Munro, age 49, still overweight and turning into a lobster through sunburn, as they did for the famous ultrarunner Dean Karnazes with his white teeth, Californian tan and 0% body fat who ran beside or near me for a large portion of the race. Those were the supporters who screamed so loudly at Wellesley College that you could hear them half a mile before you saw them and who yelled and waved each runner up Heartbreak Hill and celebrated like lottery winners every runner who kept going  and made it over the top without stopping.

I didnt have the run I hoped for. I got cramp a few times, I threw up, I was over heating and couldnt keep my heart rate low.  I crossed the line, close to tears from frustration and pain, in 3:30:22, 15 minutes slower than my target, despite the best training of my life and having had no alcohol for nine weeks. I ran so hard, but it just wasn’t happening, yet over the second half of the course as my race fell apart, I had to keep trying because the crowds just grew and grew and kept urging me on. After collecting my medal I ended up in the medical tent. Nothing serious, just pushed a wee bit too hard. I was still in the medical tent when the bombs went off.

Two loud bangs. No echo or reverberation.  Bang . Silence. Bang. Silence. In the windowless environs of the large white tent there was no idea initially what had happened.  Word filtered through of an explosion, and even then the initial assumption was of an accident.  Then came the call to free up the beds.  I was well enough to walk so got myself discharged and then made the long cold slow difficult  walk against the flow of confused disoriented runners and spectators until I finally met up with Helen. It wasn’t until much later that we found out just how close we had both been to the explosions. There were a number of chance circumstances which kept us from fulfilling our plans that afternoon or we would have been much closer still.

What happened in the medical tent is someone else’s story, but I have no doubt, having seen the setup first hand that the way the medical facilities were set up probably saved many lives. It is ironic, but if you are going to be a bomb victim, then near the finish of a marathon with all of its stewards, police, military, paramedics, doctors and nurses is probably just about the best place for it to happen. Near the finish line of a marathon in a City with some of the best surgical hospitals in the world improves your chances further. The response by individuals was extraordinary. The response by the City and its Citizens was immense. It was quiet, determined, resolute and dignified.

Many thousands of people had a great Boston experience on Monday.  They ran the race of their lives cheerd on by massive support. The bombs visited terrible tragedies on families and individuals. Yet even in the aftermath of the tragedies,  the people of Boston paid great kindnesses to the runners, taking them into their homes, feeding them, keeping them warm.  As the day wore on, the runners re-emerged onto the streets. Not the usual raucous post race celebration, but just quietly, confused, tentatively. Slowly more and more Blue and Yellow appeared. In the bars and restaurants the runners wore their medals, not in triumph, but in tribute. Quiet nods, handshakes, hugs, gently enquiring “did you finish?”.  And the locals joined in, in spite of everything still offering congratulations and heartfelt apologies that this should have happened to the runners in their city.

I still have a sense of disbelief and outrage that this should have happened. As a runner, I am even more dismayed that the bombers targeted the supporters.  In some ways, there might be some sense to targeting those actually running the race, those selfish runners, but not the supporters who stand and scream and cheer complete strangers and loved ones alike, just because they want to celebrate the fulfilment of that dream to be better than we are. They are the innocent, generous, giving participants in the marathon.

It finally struck me this morning as I gazed out the plane window onto the snow covered peaks of the Scottish Highlands why this upset me so much. Because I finished only a short time before the bombs went off, there is a high probability that all of those people who ended up in hospital had cheered and clapped for me as I ran down Boylston Street to the famous blue and yellow finish line.

While leaving Boston airport last night I had a touching conversation with an airport security guard. An older man with sad eyes. We spoke quietly and he asked if I would come back. I said that I would be back. Good, he said. Lots of runners are saying that.

I didn’t run the race I wanted, which means that I didnt re-qualify for Boston. And I am glad, because I want to have to requalify and I want to do it the hard way, to have to earn the right. I will sweat blood to make sure I get another qualifying time and get back to Boston, and when I do, and I charge over the top of Heartbreak Hill and race all the way to Boylston, I will Be Fearless  and by God am I going to give those supporters something to cheer about, because they deserve that much. 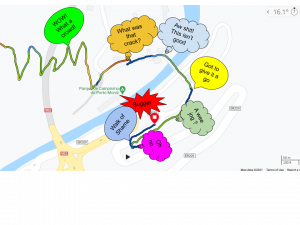