Did I mention I am going to Boston? 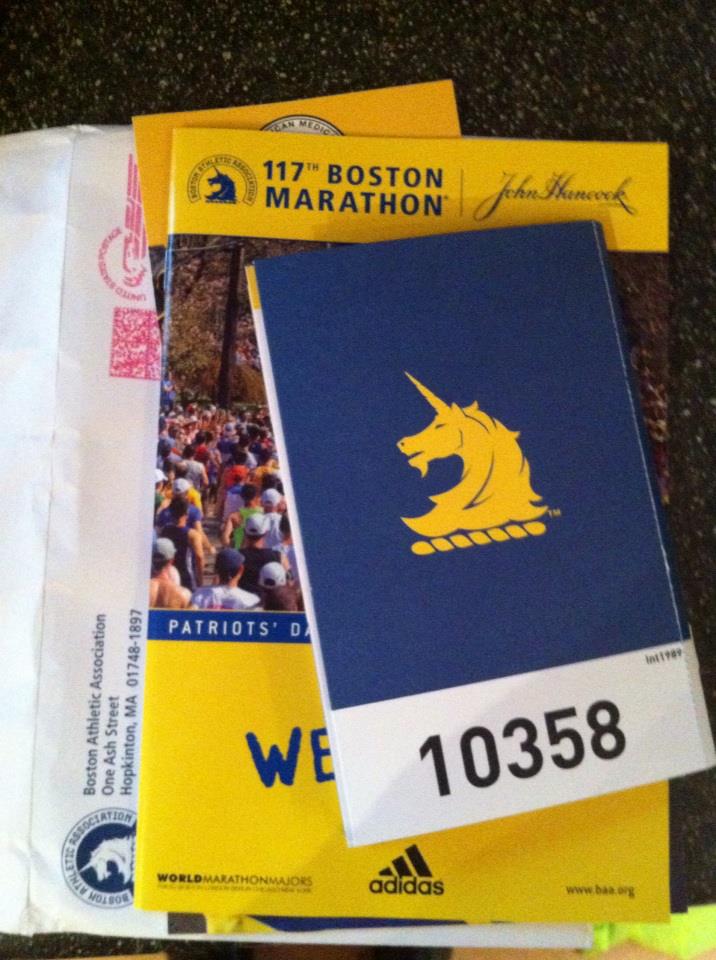 The Boston Marathon is the blue riband of marathon events for runners. It is the oldest, most prestigious race and it is the only one for which there are qualifying standards. On April 15th I shall be on the start line in the town of Hopkinton and for me that will mark the end of a journey which started way back in 2006.

January 2006 and Helen decided she wanted to learn to run, so one winter’s evening we went for a jog/walk to the Red Phone Box in Glenochil exactly a mile away. It was something of a shock to the system. In my head I was the same slim, super fit person I had been at University when I was Captain of the Rowing club. Unfortunately my lungs and legs had long since forgotten how to do this and my waistline had grown to accomodate my liking for good food and malt whisky. But at least in my head I was still young and fit, despite all the evidence to the contrary.

Never one to be put off by my lack of ability, I entered a half marathon in Edinburgh. I trained hard and in my mind I was running like a gazelle whereas the rest of the world probably saw an old fat bloke puffing round the streets snorting and sweating like a distressed warthog. I can remember the first time I did a really long run (7 miles!) and it seemed so far and hilly that Helen came with me on the bike to make sure I was ok! Those were the days when Sundays were spent on the couch because after the “long” run. I was so wiped that is all I could do!

Eventually race day arrived, and I turned up in a panic at Ocean Terminal in Edinburgh for the Edinburgh Half Marathon. Not having a clue, I ended up rushing around before the start, struggling to find somewhere to go the toilet. Having relieved myself somewhere entirely inappropriate, I duly got stuck into the race. Totally pumped up, I set off too fast, by 7 miles I was dying, and struggled round in just under 2 hours. After the race I was completely destroyed. I couldn’t walk, I was shivering, and I remember sitting in a cafe afterwards struggling to lift a soup spoon to my mouth. It took me a full week to recover from that race.

Remember I said I was undaunted by my lack of ability? At the race, I had picked up a flyer for the Toronto Waterfront marathon.  Monday lunchtime the conversation goes like this:

Me – Do you think you could run a half marathon?

Me – Its in Toronto.

So we signed up there and then, Helen for the half and me for the full.

I couldn’t have picked a better race for my first marathon. It has a good website which was updated regularly to feed my growing excitement. They enlisted Coach Jenny to provide training programs and online advice, and the regular newsletters kept me enthused right through the summer.

While waiting for the bus at Pearson International Airport we spotted some others who had come off our plane, all of whom were wearing giveaway running shoes.  Bill, Adrian and Fiona were to become good friends and for a while we would meet up but never in Scotland – only overseas.

One of the features of many big city marathons is the International Breakfast/Friendship run. Usually held the day before it is a chance for overseas runners to get together for an informal loosener and to run through the city for a few kilometers usually dressed in national costume and carrying flags. Toronto was our first experience of these events. At the run from the Running Room we were befriended by a group of local runners who took us under their wing. Again this was the start of many long friendships and the people we met that morning, we have subsequently run with in marathons on both sides of the Atlantic.

My first marathon itself was a disaster. I had a target in my head of running 4 hours.  I struggled with my asthma, had to stop and stand in a queue to use the portaloo after 5 miles and it took until halfway before I began to get any sort of rhythm at all. By 20 miles I was broken and I remember trudging bleakly back towards the city. A piper spotted me in my saltire vest and started playing Scot’s Wha Hae and I could have kissed him. Eventually I plodded back to the finish in just over 4:45.  A harsh reality check.

We had arranged to meet up with our new Canadian friends afterwards in a pub called the Jersey Giant, somewhere we have returned to many times over the years.  As alcohol flowed someone had the bright idea of running  Chicago marathon the following year and in the spirit of fools rush in, I said me too! That was the start of a running odyssey which has taken me to many races, many countries and through which our circle of friends has met up for races all over the world. That, as they say, is a whole other story.

The other thing which happened in the Jersey Giant is that I was chatting to this complete stranger who was himself an accomplished runner.  I declared that I wanted to run Boston.  Bearing in mind that I had just run 4:45 and the qualifying time for me was 3:30 this was quite a claim. Not only did he not laugh,  he was totally supportive and encouraging. Fabio Fernandes did me a kindness that day which is an example to us all and which I shall never forget.

This was the start of the quest for Boston.  My times started coming down but never quite got to the qualifying standard. Finally two years ago I started to get closer. 3:33 in Rotterdam, 3:32 in Geneva, 3:31 in Lochaber, but still not close enough. Then of course the BAA changed to qualifying standards and moved my age group to 3:25. Disaster!

Never daunted, I kept at it. I may not be talented, but I am persistent.  In 2012 I signed up for the Highland Fling 53 mile race.  A change of diet and some personal training saw me get stronger and finally lose some weight.

I was using the Lochaber marathon as a last long run before the Fling and I ended up running a 9 minute PB to get 3:22 my Boston qualifying time. It had taken me 5 and a half years and an improvement of 1 hour 25 minutes, but I had done it.

The journey to Boston has been a long one, and in some respects the journey itself has been more important than the destination.  The miles have hurt, there have been many disappointments, but there have also been great times shared in great cities with great friends.

The race will take care of itself and I shall give it my best shot. I have my goals and have worked hard this year to make the improvements needed to achieve them an dwear the Unicorn Jacket with pride. Regardless of the result it will be doubly special because of the people there running with me: James who we met through one of our Chicago trips; Larry and Emmy who were part of the crew who looked after us, that first Saturday morning in Toronto; Helen who is of course my chief supporter and co-conspirator and who I have no doubt will get her own Boston qualifier one day soon; and finally Fabio, who listened to the dreams of an old fat bloke many years ago and believed in him.